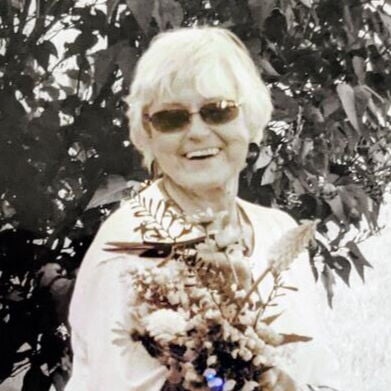 Mae LeHane (nee Zehfuss), age 91, passed away on Wednesday, October 28, 2020. Janet was born in Pittsburgh, Pennsylvania, on August 19, 1929, to Elva and William Zehfuss. She shared her childhood with her sister Claire. Janet was a graduate of Carnegie Mellon University and a proud Tri Delta sorority member. She married Louis James LeHane.

While Lou was working on his Master’s thesis in Human Resources and Business Management, he was an intern at the department store where Janet was his supervisor. He quickly became the “teacher’s pet” and they were married on October 7, 1955, in the chapel at the University of Pittsburgh. Janet and Lou had four daughters. Twins Kim and Pam, and younger sister Lorie were born in their first hometown as a married couple in Erie, Pennsylvania. A few years later, Leslie was born in their third hometown, in Wilmington, Delaware. There were many more moves after that which took them from coast to coast. The girls have many memories of their mother packing and unpacking and making each home a beautiful showpiece. Her strength led her to be considered the family Matriarch and she was always ready to share her wisdom. She was highly respected and loved by all who knew her.

The words most people use to describe Janet are “classy and creative.” She was cheerful, funny, smart, and a talented gardener and artist. Her family and friends will continue to cherish her paintings. Janet was a world traveler with her husband, Louis, and on her own. Her trips included a garden trip down the Mississippi, a photo safari on the Serengeti, an artist trip down the Seine, and a trip to paint the beautiful beaches and cliffs in Portugal. Janet was a gifted storyteller, and all who knew her have hilarious tales that they will share for years to come.

The LeHane family wants to extend their gratefulness and love to Pasqual Zicari. He is a very special gentleman that our mother met almost 20 years ago. His exuberant, engaging nature, and generosity of spirit brought the light back to our mother’s life after the early death of our father. Janet is preceded in death by her husband of 40 years, Louis J. LeHane; her daughter, Pamela LeHane Pezewski; her son-in-law, Gary Pezewski; her parents, Elva and William Zehfuss; and her sister, Claire Haberstro. She is survived by her loving daughters, Kim Rohr (Dan), Lorie McKay (Bryan), and Leslie Stamp (Nigel); her grandchildren, Nathan Pezewski (Heather), Danielle Sobel (Sean), Sarah Rawlings (Stanley), Olivia Medina (Roland), Louis Rohr, Emma Stamp Falk (Hugo), Taylor Stamp, Lucas Rohr (Andrea); and a growing number of wonderful great-grandchildren and nieces and nephews.

The family would like to extend special thanks to the wonderful caretakers and hospice staff at Spring Arbor of Winchester who showed exceptional compassion and respect to the family at the end of Janet’s life here on earth. Due to COVID restrictions and to keep all of Janet’s friends safe, the family will hold a private service at the Oatlands Historic Church of Our Saviors. Pastor Jonathan Kell will officiate. Our Scottish mother would be happy to know that a bagpiper will play some of her favorite hymns.

Janet was an active member of the Loudon Garden Club and the Ladies Board. In lieu of flowers, memorials can be made to the Ladies Board Foundation supporting Loudoun Hospital nursing scholarships. You can send them directly to the Inova Ladies Board or to our family at Kim LeHane Rohr, 208 Orchard Street S Northfield, MN 55057.

Evolution to Transformation Part 2: Professional Journey July 2022 Update Thanks to the many of you who have reached out in... END_OF_DOCUMENT_TOKEN_TO_BE_REPLACED

FF Miles - Memorial Day 2022 It has been a few months since I have written about the state of the Hospitality and Travel... END_OF_DOCUMENT_TOKEN_TO_BE_REPLACED

What will Holiday travel look like this year? by Dr. David Miles At best, it may be nerve-racking, difficult, frustrating, and... END_OF_DOCUMENT_TOKEN_TO_BE_REPLACED